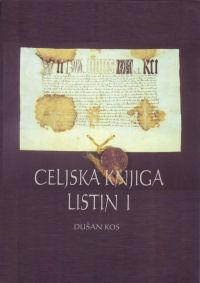 
The first volume of the edition presents all the records (212) thus far known which have been preserved in the original or in copy, and which were issued or received by the free gentry of Žovnek – or in which they were at least mentioned – up to the year 1341. The last record reproduced in this volume dates from 16th April 1341, when the Emperor Ludwig elevated the free gentry of Žovnek to the title of Count, and granted them the right to adopt the name of Celje. The records have been treated in accordance with the present-day principles for publishing editions of records. They include: the various uses of brackets; the faithfulness of transcription; the contemporaneity of the punctuation, citation of extant transcriptions, description of the physical appearance of records, listing publications up till the present, noting transcriptional errors, damaged passages, individual features, misunderstandings (particularly in the scientific apparatus), etc. Also provided were indexes of personal and place names, and of the most interesting concepts.

price
not for sale