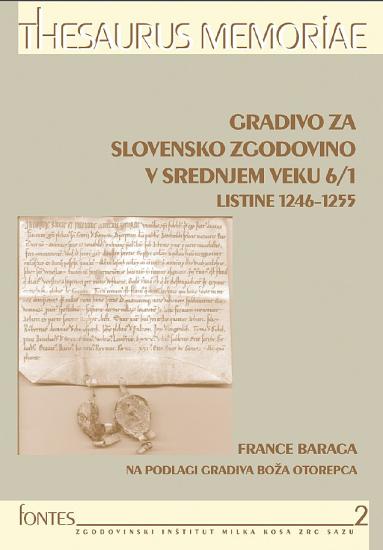 
The present edition denotes a continuation of the collection of documents, which the historians Franc Kos and later Milko Kos began publishing in 1902 within the frame of the Leonova družba (Leon’s Society) in Ljubljana. Five books were issued under the title “Gradivo za zgodovino Slovencev v srednjem veku” (Materials for the history of Slovenes in the Middle Ages) (1902, 1906, 1911, 1915, 1928). The present edition is based on different starting-points, as modern researches into history can no longer refer to regestum (abstracts of documents) only but they must derive from sources themselves, published on the basis of entire originals, and equipped with appropriate critical apparatus. The book was written on the grounds of the material the historian Božo Otorepec of the Historical Institute collected. Included in the edition are documents of a ten-year period – that is from 1246 (with that year the fifth volume of Kos’s publishing of the Gradivo za zgodovino Slovencev v srednjem veku concludes) to 1255. The first volume (6/1) does not include a name index and a table of contents, which will be published in the second volume (6/2).