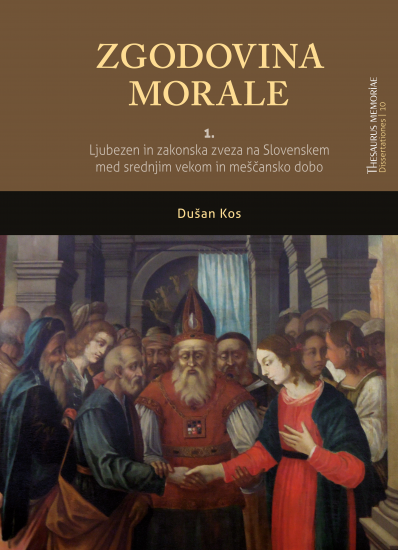 
The monograph ('History of Morality. Love and Marriage in Slovenian Territory Between the Middle Ages and the Bourgeois Period') is a research on the historical development of marriage or, rather, relationships between a man and a woman—ranging from passion, love, friendship and cohabitation to circumstances that rendered union impossible or thwarted marriages on the basis of religious theories, lay conceptions, and customs. It is the first of two books on the history of love morality in Slovenian territory between the beginning of the Middle Ages and the end of the 18th century, just before feudal society was transformed into industrial or bourgeois society. The second book will present the other side of love patterns: extramarital love, sinful and criminalised love, domestic violence, as well as dissolution and termination of marriage or extra-marital relation.

The research casts light on the lives of people through their actions and thoughts, by drawing on archival material, as well as private and official records of religious and secular institutions that regulated the flow of marriages, families and morals. The background and main story is the divorce of Marija Kajetana and Jošt Anton Count Ursini–Blagay in the period of 1769–1772. The basic reason behind their petition for divorce was the husband’s sexual “impotence”. Based on their case and a detailed analysis of other cases involving sexual dysfunctions that wreaked havoc on love and marriage, the author examines general love mentalities and perceptions of marriage from forms and methods of arranging marriage vows, engagements and weddings, their motives, as well as the role of emotions in marriage. In legal theory and practice, sexual issues were extremely complex cases which revealed a whole spectrum of views on love and marriage, by constituting a dysfunction that hindered formal, divine and physical perfection as well as validity of marriage.
Even though the monograph largely centres on the territory of present-day Slovenia, it draws comparisons with the neighbouring regions and the broader European area. In doing so, it also takes into account theological, philosophical, and art sources. Drawing on real cases from the Slovenian environment as well as empiricism and statistics, it also clarifies certain myths. For instance, the misconceptions of the poor and unfree peasant, the patriarchalism of Slovenian society, suppressed women, the notion of sexual repression imposed by the Church, as well as the myth about the impact that Enlightenment had on the changes in morality of the lower social classes. In Slovenian territory, as well, relations between the sexes were more reciprocal and affectionate than implied by official records. Moreover, analyses of economic and legal indicators of women’s power in family and marriage relations through legal disputes also show that women held considerable social power also in historical periods that are still largely regarded as reactionary.